Yes—in most case we can connect directly to your refrigerator. Connecting the system will extend the life of your ice maker and make clearer, great tasting ice. You can turn your fridge into a Culligan "Water and Ice Machine".

Yes—The system uses multiple processes including Reverse Osmosis to make great tasting, low sodium drinking water. Reverse Osmosis removes about 97% of the TDS (Total Dissolved Solids) from most tap water. Read the labels on bottled water and you will discover Reverse Osmosis is the same process used by most bottlers—so in effect—you really are getting "bottled water without the bottle"!

Reverse osmosis, also known as hyperfiltration, is the finest filtration known. This process will allow the removal of particles as small as dissolved individual ions from a solution. Reverse osmosis is used to purify water and remove ions and dissolved organic molecules. It can be used to purify fluids such as ethanol and glycol, which will pass through the reverse osmosis membrane, while rejecting other ions and contaminants from passing. The most common use for reverse osmosis is in purifying water. It is used to produce water that meets the most demanding specifications that are currently in place.

Reverse osmosis is capable of rejecting bacteria, salts, sugars, proteins, particles, dyes, and other constituents that have a molecular weight of greater than 150-250 daltons. The separation of ions with reverse osmosis is aided by charged particles. This means that dissolved ions that carry a charge, such as salts, are more likely to be rejected by the membrane than those that are not charged, such as organics. The larger the charge and the larger the particle, the more likely it will be rejected.

A typical system consists of:

Permeate flux and salt rejection are the key performance parameters of the reverse osmosis process. They are mainly influenced by variable parameters such as; pressure, temperature, recovery, and feed water salt concentration.

Water Pressure—Increased feed water pressure will increase permeate flux and decrease the permeate TDS. With excessive pressure the membrane may become deformed or compacted and a decrease in product flow will result.

Temperature—Increased temperature will increase permeate flux, which increases salt passage. It is also important to note that every unit is rated for a product flow temperature of 77°F (25°C). With a temperature decrease, the product flow will decrease. On average the membranes lose about 2% production for every degree below 77°F.

Feed water Concentration—Increased TDS or salt concentrations will decrease permeate flux and increase salt passage. This can also lead to surface coating or fouling by the salt.

A standard RO System has a hydraulic on/off pressure valve which is controlled by source water pressure to send pre-filtered water to the membrane to make water for storage.

You can trust the professionals at Culligan Water to meet your needs! 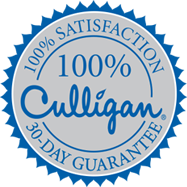